Wine production : France back to its leading position 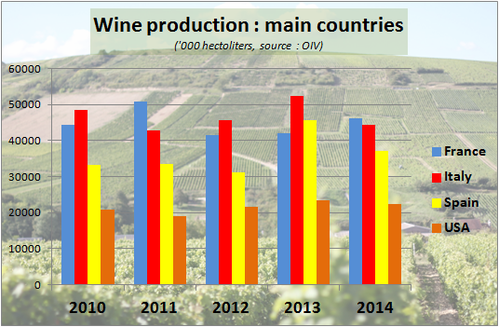 With  a production of nearly 46.2 million hectoliters, France takes back its position as first producer of wine in the world  in 2014, according to figures published by Organisation internationale de la vigne et du vin (OIV). That was enough for french website Atlantico to rejoice that 2013 "was just an accident", as if the first place was rightly France's due.

A catchy phrase is OK, but to read the figures correctly is better. And those from OIV tell another story. In fact, since 2010, Italy was the leader three times (2010,2012, 2013) and France only twice (2011 with a production exceeding 50 million hectoliters, then 2014). And even Spain showed its capacity to beat France on a single year (see infography). The irregularity of production depends in particular on climatic variations that don't occur the same way in different countries. The year 2014 shows a good example, with Italy and Spain respectively down 15 and 19%, when their neighbour France is up 10%.

Nevertheless, the three leaders are in a downward long terme trend, namely France, which production was still clearly over 50 million hectoliters each year, at the beginning  of the decade 2000. On the opposite side, the production in countries like China, Australia, Argentina or the USA tends to head north, even if the latter is down in 2014, keeping its 4th place with a production much smaller than the three main producers.

Anyway, theses figures are about volumes, and what really counts is value. There, the trend is clearly upward, and no one understands that better than french people, who drink way less wine than before but have reoriented their consumption from the simple "vins de tables" to the AOCs. In 2013, the global trade in wine has decreased by 2.4% in volume, but increased 1.4% in value. And there, France IS the world champion, with exports reaching  7,8 billion euros in 2013 : more than Italy and Spain figures gathered.